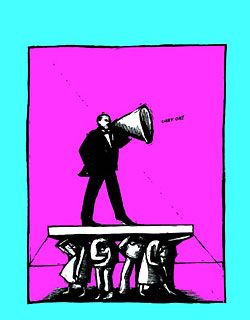 THE BURDEN OF AUTHORITY

We humans can no more do without authority than we can do without other human beings. But down here on the short end of the stick, where freedom depends on "benefits," the burden of authority weighs heavy.

Just think: if we were financially independent, we could each maintain our personal authority over our personal lives until the end of our days. But we're not. So we carry on.

"If you do happen to make it into the
office of that man upstairs, he is
going to pee down his leg."


THE BURDEN OF AUTHORITY

Richard Sennett puts a few conditions on our Trust in Authority
Kathleen Kleinmann tells how it goes,Taking Authority
Rus Cooper-Dowda finds herself Safe in the Arms of Authority
Deidre and Brianna Hammon carry The Burden of a School's Stupidity
J. Quinn Brisben enjoys the fun when Authority is a Rascal
M.A.C. Farrant speaks here with the Voice of Authority
Tom Racioppo tells who may not dance By Authority of the Guardian
Lucy Gwin asks, Could You Kill This Man?
Hugh Gregory Gallagher once feared The Last House Call