from a report by Simone Aspis 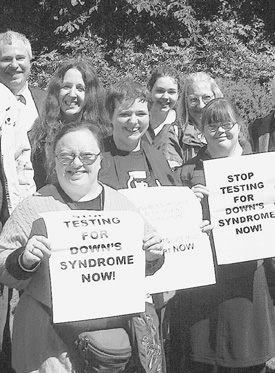 want to test pregnant women and

OUT IN FRONT: ANYA SOUZA AT LEFT, KATHY GILBERT AT RIGHT.

On May 19, a small group of people with Down Syndrome and their supporters disrupted the International Down Syndrome Screening Conference at Regents College in London. This is the first time that people with disabilities have spoken out publicly about prenatal screening. Their protest opens up the debate about genetics, eugenics, and the rights of disabled people.

As a result of the protest, the conference organizers allowed Anya Souza to speak from the podium, a platform her group had previously been denied. Ms. Souza, a trustee of the Down Syndrome Association who is labeled as "suffering" from the condition herself, told the doctors why she opposes the screenings.

Obstetricians, medical ethicists and genetic counselors have made testing for congenital disability a routine and even obligatory prenatal procedure throughout the "developed" world. Although the Roman Catholic Church and
scattered right-to-life organizations have spoken out against abortion generally, no one has gone on record against aborting unborn children with disabilities simply because they have disabilities. Today only an estimated 10 percent of fetuses with disabling conditions, called "birth defects," ever make it to the delivery room.

Objecting to prenatal screenings and abortions on disability rights rather than religious grounds, Souza and her fellow activists wrote to conference organizers in advance and asked to speak but were refused by the main organizer, Professor Howard Cuckle.

The protesters found it unacceptable that doctors would discuss better ways of preventing the birth of people with Down Syndrome while excluding the voices of people with that label from the debate. That runs, they said, directly counter to one of the main demands of the disability rights movement: Nothing about us without us.

"It's doctors like you who want to test pregnant women and stop people like me being born. You can't abort me now, can you? You can't kill me. Sorry!

"I have the right to a job, to services when necessary, to a decent standard of living, to know about my medical problems, to speak my mind, to make choices about my friends, whether to have sex, and so on.

"To do this, you have to be independent when you grow up and not get separated from society. ... I may have Down Syndrome, but I am a person first."

Kathy Gilbert, another of the protest leaders, said later she enjoyed seeing the conference "although I was a bit scared of what the conference people were saying. I think screening pregnant mothers with Down Syndrome babies is wrong. They are wanting their offspring to be able to enjoy the world around them and have endless happiness. I, for one, gave my mum pride and joy and I will continue to do so. I think that we should be treated fairly and equally, not got rid of, because there is so much more in life that we can do."

"We are what we are," Gilbert concluded. "Ask our opinion."

The protesters expect that their action, and Ms. Souza's speechwhich received warm applause from the confereeswill persuade the organizers to ensure a full debate at next year's conference, and proper representation of disabled people in that debate.

"The normal-life/defective-life comparison in the context of 'wrongful life' actions is grounded in the presumption of a right to be born healthy."

"The small numbers of babies still being born with these conditions [spina bifida, hydrocephalus, cardiovascular problems, Down Syndrome and others] occurred because a few mothers failed to visit their medical practitioners or antenatal clinics, refused to undergo the tests, or declined to have terminations."

Richard Lynn in Eugenics: A Reassessment

"There is excellent evidence that there is a gene that causes autism on chromosome 7."

"It's uncontroversial that serious disabilities should be prevented in born persons.... Why not prevent the birth of persons with these conditions?"

"Here the state must see to it that only the healthy beget children... It must declare unfit for propagation all who are in any way visibly sick or who have inherited a disease .... Those who are physically and mentally unhealthy and unworthy must not perpetuate their suffering in the body of their children."