Thanks to notes from her partner Phil Calkins, we’ve followed in these pages Sharon Mistler’s tour of two hopitals, one disastrous “convalescent home,” and her rejection by a hospice on grounds that she wouldn’t give up her ventilator. Now she is gone. She is survived by her lovely sister Linda; Phil, the love of her life, and by all who benefited from her work in disability rights. This means you. This means us. 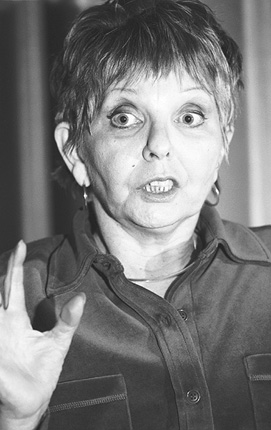 As we go to press, a memorial service for Sharon goes forward at the Endependence Center of Northern Virginia. She was its director when she distributed the first copies of a brand new magazine today known as the Mouth. Eight years later she blew the whistle on the U.S. Department of Justice in these pages. She’d worked there for four years in what’s called the Disability Rights Section and found it, for one thing, inaccessible. On her last day, with the help of some non-disabled co-workers, she posted This Is Inaccessible signs all over that section.

Sharon took a lot of flak for instigating our two-issue exposé of the DOJ, but I hope we’ll honor her now with a few moments of silence while we acknowledge what no one at Justice has admitted to this day: She was right. Here are a couple of the many things she was right about and said here out loud:

“Yes, I would file a complaint with the DOJ so that Congress would know we need the ADA. But I know damned well that the DOJ wouldn’t do anything....

“The people we’ve entrusted our laws to and given our tax money to don’t even believe in the ADA. ...

“Any new law, if you don’t start enforcement hard and heavy right off the bat, people will assume that you’re not really going to do anything....

“Here is the message you have to get across to people. This is your law and the only way you’re going to keep it is to enforce it yourself.”

Now a current note from her beloved.

I talk to Sharon every day. So far, she hasn’t responded with words, but she did laugh at me. It was when I went to the funeral home to identify her body and found that... yes, indeed, the funeral home is inaccessible.

Perfect. So I tell the funeral home folks a little bit about Sharon, inform them that lots of her DOJ friends will be at her memorial service where I will speak about your funeral home. But I also told the funeral home people that I can give them the name of a DOJ architect who will be happy to help them, blah blah, blah.

The manager had appeared magically by this time and told me that it was such a coincidence I had come on the very day they were meeting to discuss how they can make the place accessible. Sure.

So a few minutes later, while I’m waiting by myself for the guy to bring her body, I heard her laughing. I think she was laughing at me as well as at the wonderful appropriateness of the situation. At least I hope she was laughing at me. I’m waiting for her to start talking to me as well. Maybe she’s too busy talking to Justin, Evan, Howard, Ed, Wade, Ron Mace and all of her other friends right now.

I am newly disabled, newly separated from my wife, trying to laugh off the pain and isolation. I may have landed on a different planet: Section 8, food stamps, therapies—a major cluster fuck. They could make a country song out of my last two years, but I don’t have a dog.Your magazine’s insight and humor is a lot better than a large tube of Ben-Gay Ultra Strength. You give me hope.

I am a 40+ year old white guy with cerebral palsy and not much of an ax to grind with anybody except the health insurance industry and pointy-head elitists who think they know what is best for me. I am conservative politically and set no limits on the power of God.

Your issue dedicated to religion [Mouth #75, “The Man Upstairs”] was wonderful and shed some light on many things. Josie’s story [“Lesbian Gimp Christian”] went straight to my heart. It was an equal blend of grace, challenge and inspiration.

Do you have many subscribers in the UK? From here (and from anywhere) Mouth is the most informative, intelligent, radical, creative, beautifully designed magazine about. I would like to contact other UK readers. Is this possible?

[What we’d like is a progessive dinner, from house to house, of Mouth readers everywhere. Anybody up for that? How about a big old sleepover at your place? — Lucy]