Not Another
Peep Out of You

The surgeons are eager to chop, so it falls   to the anesthesiologist to give me the grim facts for the informed consent. All surgery is risky. With my compromised breathing, anesthesia might be too much. Or I could aspirate. Or pneumonia might set in.

It's nothing new. I might die. And I'm interested to observe that I'm facing the possibility without terror. This thing in my abdomen that brought me to the emergency room is so bad, I'm eager to get it out. Whatever happens, happens.

The anesthesiologist goes on. To minimize those risks, we're going to use a vent. A tube will go through your nose into your chest. Because the tube runs between your vocal cords, you won't be able to speak when you wake up from surgery.

From outside myself I explain coolly that I can get hurt if handled the wrong way. We need to discuss how to get me moved from the operating table to my bed in ICU. In detail.

I want one of my people to do it.

Gangs of medical people tell me they're professionals, they know what they're doing, they won't hurt me. This thing in my stomach is killing me, literally I think, but I won't let some person lift me who doesn't know how to do it, when I can't tell them what to do. I won't sign your consent form, I say, They can't operate until we get this sorted out.

I wonder why they don't say, So OK, don't consent, don't get your operation. That's what any smart lawyer would say. But they're not smart lawyers. I am. So we negotiate  until the whole gang caves. My brother Eric, a medical student in this hospital, will scrub up and lift me. I mark up the informed consent form, put the plan in black and white. Then I sign. No more talk. I'm processed and prepped and draped and zonked out.

The next thing I know, I'm being grabbed by two women in shower caps. One has my knees and the other is scooping up my shoulders.

It's the wrong lift. All my weight will hang from two sets of fragile joints. My curvy spine will dangle unsupported, putting the spinal cord and that bundle of nerves at risk. In a microsecond of terror I see the whole calamity.

But one of them notices. Stops. Looks. Are you saying Stop'?

I nod my head.

We're just going to put you in this bed and then we'll be done.

You don't want us to move you? We'll be careful. It'll just take a second.

I hear Eric outside the door talking loud, trying to get in. I look in his direction, pointing with desperate eyes. Let him lift me, I say in silence.

You want your brother to lift you.

We're going to lift you, and then your brother can sit with you.

No ! I mouth, now expecting to be understood. 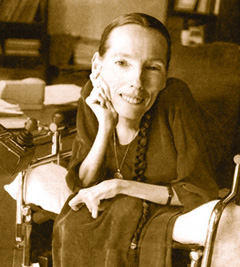 And a second is all it takes. A second in which panic sends my mind out of my body, as abused minds are said to flee when denied control over abused bodies, to look down at what seems like a pale shriveled corpse being tossed like trash from one place to another. Although my mind has bolted up to the ceiling, it can still feel that corpse's heart pounding, and knows it isn't really dead, it's just being treated as lifeless, a thing of no consequence.

A second later and my mind and body are together on the ICU bed. Eric is there, breathless, apologizing. They were actually blocking me. I should have shoved them out of the way.

I close my eyes and shake my head. They'd have kicked him out of medical school for assault and battery. Much more than I have a right to ask.

He sees my back and legs aren't where I like them. He repositions them and puts pillows and towels in the nooks and crannies. I almost feel human again. They didn't hurt me. I'm OK. Maybe. It will take a long time for my mind to feel safe and cozy in my body.

Even without a voice, I made them attend. I made them understand. What silenced me was not voicelessness, but being in a place where what I said and what I wanted didn't matter. Fourteen years have passed, years in which I've enjoyed some success in law, politics, and writingsuccess enough to imagine day-to-day that my words have power. But I haven't forgotten. I know there are dangerous places where any of us can be silenced.